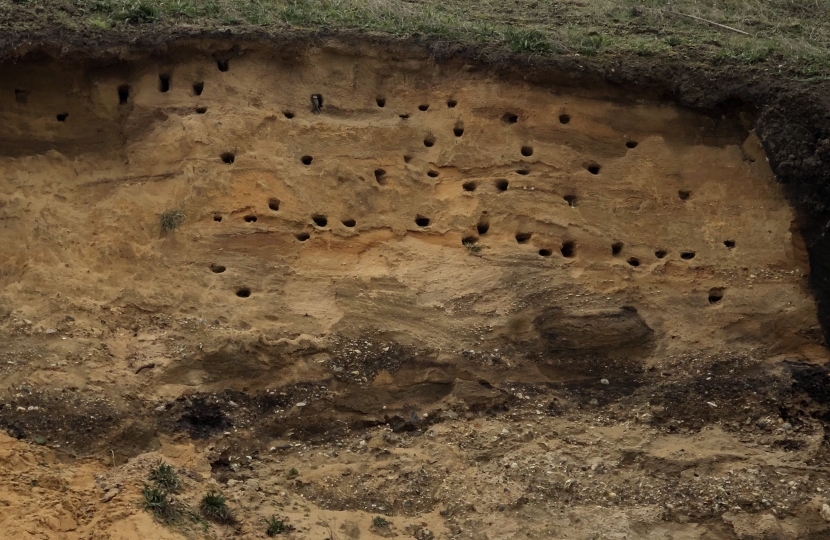 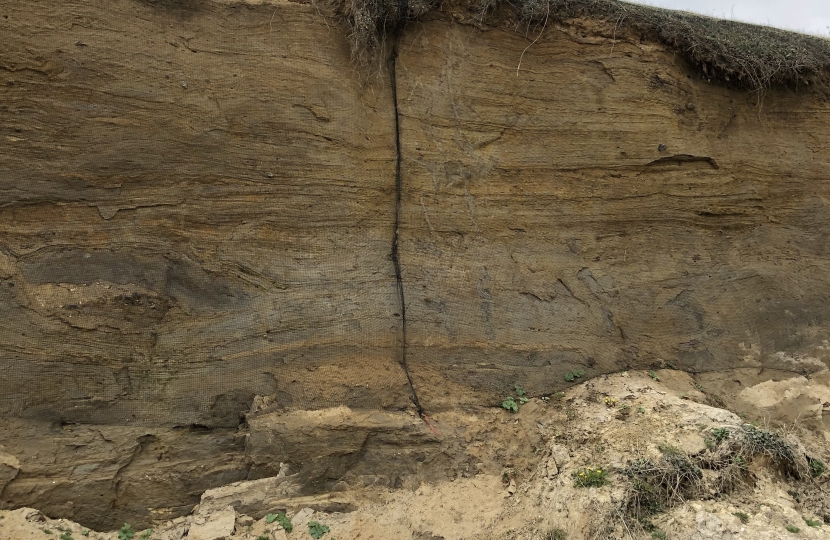 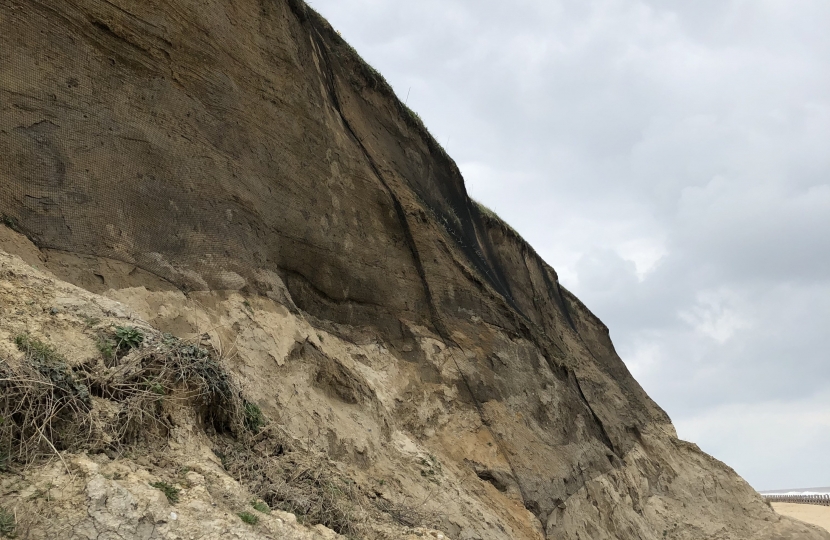 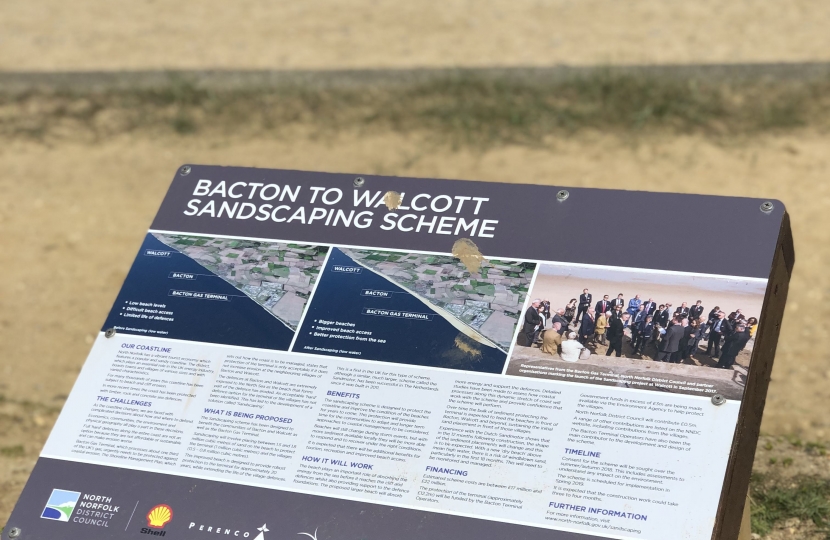 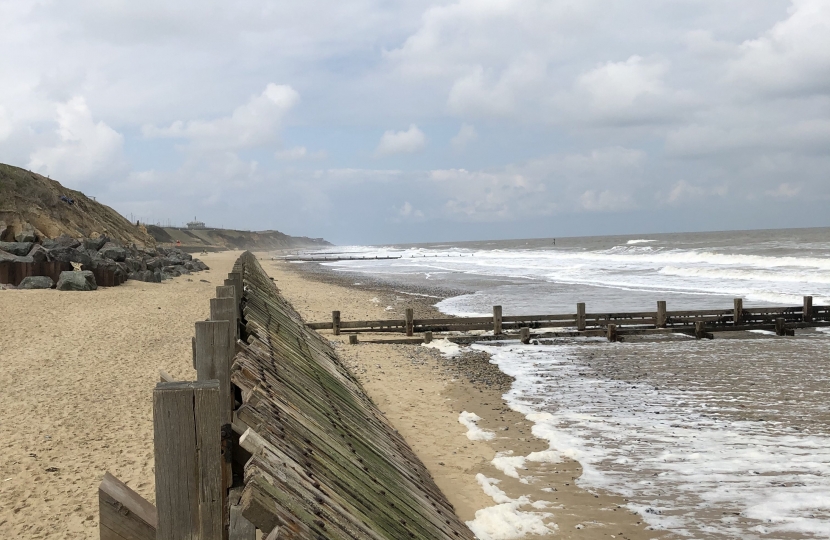 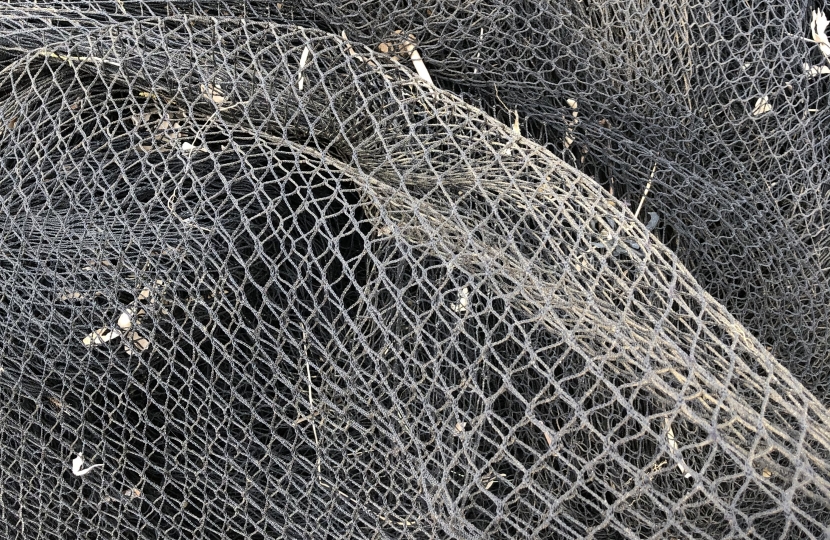 The Bacton bird netting scandal has dominated the headlines not just in North Norfolk but around the Country this week.  I have today been to see the cliffs at Bacton and see for myself what has been done so far and what work is still on going.  I first picked up on this issue late Monday night when people started to tweet me and Norman Lamb about what was happening.  Of course, like so many people, I was immediately shocked by what I was reading and compelled to investigate as soon as possible.

By 8am on Tuesday I was at North Norfolk District Council to see officers and get an explanation.  Before 9am that morning I had a long conversation with the Corporate Director in charge of operations to get an overview and give him my opinion of what was required. The following day I was at the Overview & Scrutiny meeting questioning the logic and rationale to what had gone wrong.

I’ll give you my take and my understanding of the event.  First of all, I think the vast majority of the social media storm failed to understand the back ground of what the sand scaping project was and the reason to why netting was erected in the first place.  That’s no excusing what happened but relevant to the context.

The netting was supposed to help the sand martins.  Help them by encouraging the birds to not use the holes that were in danger of being covered in sand when the sand scaping work started.  The netting was to encourage the birds to move further along the coast to a safer place.  At its heart, the Council acted in good faith.

The sand scaping project is enormous, innovative and designed to protect many families at risk from coastal erosion.  It is also to protect the Bacton Gas Terminal, which delivers a third of the gas to the UK.  We are talking about a significant, very important, serious infrastructure project that will take a long time and up to £22 million pounds in investment.

In short, it was after consultation and the environmental impact assessment on a project like this, that the Council believed they were acting correctly, indeed they were given clearance to erect netting.

The netting was supposed to be for good reason – the nets were not to trap or hurt the birds, it was to help them by ensuring the birds didn’t nest in danger areas when the work started.  That said was the scale and amount necessary?  Arguably not when the top layer, all along the cliffs has been agreed to be taken down.

Firstly, we need to get to the bottom of the important question of why the RSPB felt their advice was not adhered to.  They claim that their advice was to net a smaller area, 7m high and 20 – 50m wide, in a geotextile in an obvious colour so that only those nest sites at risk of being covered in sand would be blocked off and the birds could use alternative holes nearby.  They claim their advice was NOT a black net which covered the whole cliff face for 1.3km.  And certainly not a net that could have potentially got the birds tangled in.

This very important question is still being looked into, but my other questions, which I asked on Wednesday centred on the logic to use these nets in light of the well-publicised recent news of parliament petitions to stop contractors using nets to stop birds nesting.  Surely NNDC should have reconsidered their actions on the back of recent public outcries?

Secondly, I think the Council was slow off the mark and totally overwhelmed by the, ‘crisis’ situation or how to handle the social media storm.  The news broke on 5th April and it wasn’t really until late on the 8th April that they realised just how big this story was getting.  Again, lessons must be learnt but a public authority, one of which whose main roles is to be transparent and communicate with the public, took too long to inform the public what was happening.  Written press releases, with a real lack of feeling, empathy or sympathy to a story of national significance are not the way to communicate in 2019.  When the new administration is in power after the election, NNDC’s social media policy must be overhauled and I would suggest a dedicated post is given to communicating in a social media world.  It was a suggestion of mine in that Tuesday morning call that NNDC needed to keep constant communication and clarification of the situation to the public, not sit behind a wall of silence.  Collaborating and communicating with the public and other relevant authorities is always vital. I am pleased to say the communication since has been much better.

Thirdly, the damage to NNDC’s reputation is real.  It must be quickly rebuilt, not only for the good of North Norfolk but because notwithstanding the Bacton situation this is a fantastically run Council. The officers are superb individuals, dedicated and passionate in their work.

In my opinion, the first question really needs answering properly.  The Council once it got going was quick to rectify the situation and communicate better.  They will learn an awful lot by this.  But I would finish by saying that the team are a credit to North Norfolk, they acted in good faith and no lasting damage will have been caused to the sand martins due to it being early in the breeding season and because of the swift action of NNDC to remove the unnecessary top layer of netting during the week.

I would also pay tribute that if it wasn’t for the actions of twitter user @norfolkbea and her dedication to wildlife, the Bacton sand martins would not be finding their nest holes so easily today.