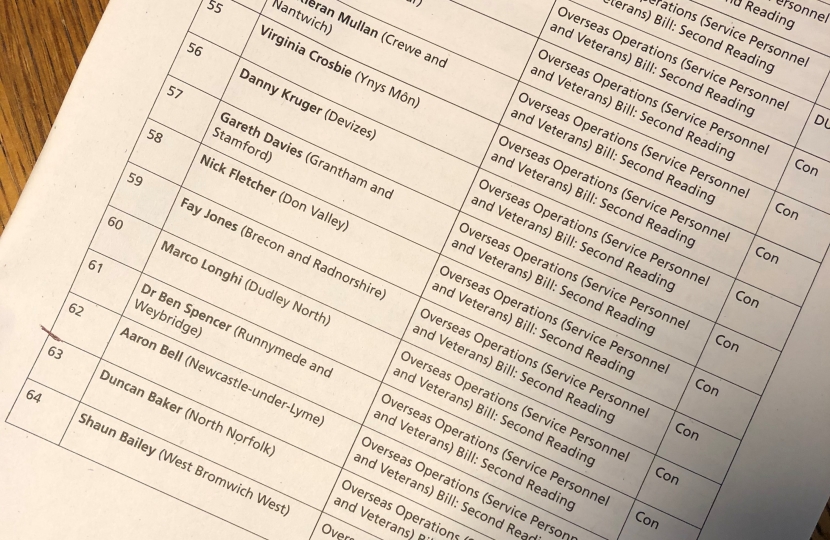 For those that give their livelihoods to protect us and our nation, it is fundamentally right that we create the laws and mechanisms to protect them.

This Bill does just that, giving security and protection to those service personnel and veterans who under extraordinary circumstances in serving their country may be subject to vexatious claims and prosecution of historical events.

This is a crucial piece of legislation, which at its core is a commitment to our armed forces. To many serving personnel and indeed veterans in my constituency of North Norfolk, I am proud to be supporting this Bill.

It is a sad world we live in when there is an industry seeking prosecutions and harassment to cause misery through vexatious claims.

Yet sadly we know this is happening - without any true understanding of the unique context or environment that military exercises operate in. Our brave forces deserve more and this Bill helps achieve that.

The operations in Iraq and Afghanistan for instance brought about thousands of allegations of unlawful killings and ill treatment.

Yet it has been proven that the majority of those allegations made against the British military were indeed false and there was no case to answer.

It cannot be right to subject these men and women to such lawfare and it is therefore sensible and proportionate to seek to protect our military personnel and veterans from prosecution for alleged historical offences in conflicts overseas.

At its core this Bill introduces the Triple Lock and places a statutory presumption against prosecution for alleged offences committed more than five years ago.

This is a welcome step to give those that have protected Queen and Country the support they need. Weight will be given to certain circumstances and consent of the Attorney General sought.

But like many, I have received emails on this. It is clear, and the Minister has outlined, the UK will never put the Armed Forces above the Law.

This does not provide blanket immunity from prosecution but seeks to raise the threshold for the prosecution of alleged offences.

The Bill still allows for allegations of wrongdoing more than five years old - including war crimes and torture where there is compelling new evidence. These can still be investigated and, where appropriate, prosecuted with a decision on whether to prosecute decided by the independent prosecutor.

Where it is important to protect our heroes from unwarranted and unsolicited repeated litigation, it is also right to allow civil claims against the MOD within a 6 year window.

But despite the fears that this may stop our service personnel from making claims - it is important to note that any time limit will still be calculated from either the date of the incident or from the date of the knowledge. Indeed. Nearly 95% of claims are brought within 6 years making this long time limit merely help stop the repeated necessity to give evidence.

This is a Bill to cover the legal framework for overseas operations.

The government has been very clear that veterans who served in Northern Ireland will be served through separate legislation under the New Decade, New Approach deal.

We all owe a huge debt of gratitude to our Armed Forces. This piece of legislation delivers on a manifesto commitment, supports the Armed Forces covenant and is a welcome step.

I want to thank my Hon friend for Plymouth Moor View for his passion and dedication to this cause. It is without doubt, that without his efforts in this legislation to end the current dreadful situation, we would not be here debating this today.