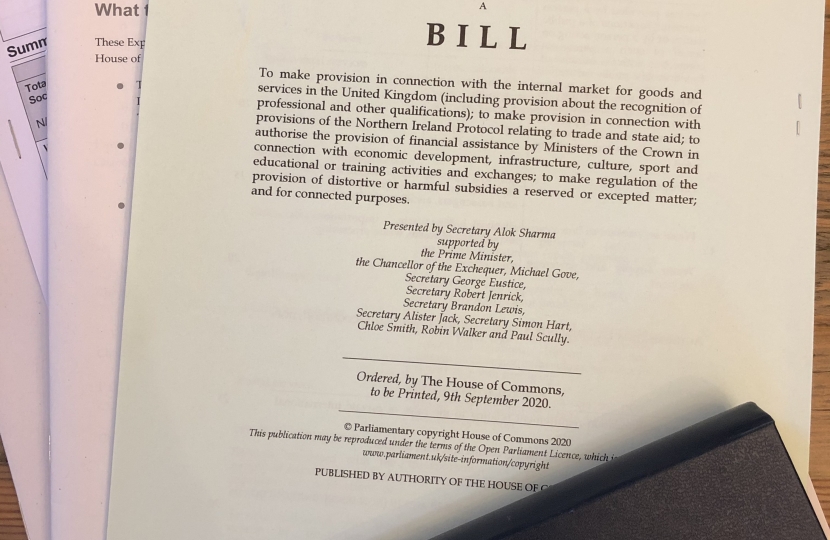 We have now had the 2nd reading this evening of the UK Internal Market Bill and I'm pleased to explain how I voted.

This issue and the public concern has deeply troubled me. It is not a Bill I have taken lightly and I have sought a lot of advice and many opinions over the matter.

I have spoken to Ministers about it and those with legal training and tried to separate some of the emotive narrative in the media to what it actually means and especially its legality.

In the short period that I have been an MP, I have always tried to be honest, fair and balanced. I believe that has been recognised, as well as the amount of the time, effort and thought that has gone into my voting decisions. Of course, not everyone will agree with every decision, but I try to reconcile the views of the majority of the constituency with what I believe to be right.

What we should all agree on is that this is a deeply complicated and complex situation. Even the country’s top QCs are unable to agree there is, or is not, a breach in law. You may have read the widely circulated article in the Spectator by the commercial barrister David Wolfson QC who wrote ‘I do not consider that there is a breach of the rule of law in the government’s approach’.  What the government's clauses will allow, is for the UK to protect itself from abusive exercise of treaty powers by the European Union and in such an eventuality that is a justifiable measure in international law.

However one views what is justifiable, the crux of the issue surrounds the agreement of Article 4 in relation to the Northern Ireland Protocol.  Specifically, the Bill creates powers in the future to make regulations in two key areas, of exit declarations, and state aid – in effect the ability to override (clearly in very specific circumstances) what we had laid out.

In considering this situation I have to consider substance over form.  And as such, I have to consider voting to look after the interests, safety and integrity of our people and sovereign nation as the priority issue here.  In a deeply difficult situation, regrettable as I find this position, this must come before whether or not certain clauses may be necessary to breach a treaty.

I do also accept there are always at least two sides to every opinion. Here there are even more. There is the legal argument of whether an international treaty is going to be broken or not. Then there is the political argument surrounding the actions.  But we should also understand the context of the Bill and why it is needed.

As a sovereign Parliament, we now have the right to be the final arbiter of our laws, part of why I and many others wanted to leave.  However, with respect, the European Union does not seem to want to honour that situation, for example over fishing rights and the jurisdiction of the European Court of Justice. It is therefore entirely sensible and actually incumbent on us to now make further safety provisions for a No Deal Brexit scenario - which this Bill sets out to achieve.  I voted to leave and we must do that without risking the Union. The government is correct that this Bill has no impact on the Good Friday agreement.

We signed up to the Northern Ireland Protocol in the belief that the important areas left to the Joint Committee would be resolved satisfactorily in 2020. That may yet happen. But, unfortunately, while both the UK and European Union negotiating teams have worked at pace, we have now reached the point where - because we haven’t yet reached a final deal on some of these complex and difficult issues - we have to consider sensible fall back options to ensure the communities of Northern Ireland are protected if agreement isn’t in place by the end of the transition period. We will, of course continue to work with the European Union in the Joint Committee to resolve these issues, however – as a responsible Government – we cannot allow the peace process or other essential parts of Government business to inadvertently be compromised by unintended consequences of the protocol.

Passing the Bill in itself will not break international law or the Withdrawal Act but clearly there are legal opinions around these clauses in what it may be necessary to do if enacted.  However, if we secure the satisfactory trade deal that many of us want, the Bill will be superseded and then become irrelevant.

There is no doubt about the complexity of the situation.  The issue goes further than a simple expression of breaking the law. My thoughts on the vote recognise all the concerns that surround it and I have carefully considered opinions of those that have contacted me.

As I stated at the start of this email, with honesty, I am uncomfortable at the situation we find ourselves in, but the Bill’s objective is vitally important and necessary to maintain our economic and political integrity.

The necessity to pass this Bill, to be used as a last resort if we cannot get a deal is not an ordinary situation but on balance is required to ensure our interests, jobs and internal markets are protected.

I hope you will understand that my final decision to pass the Bill, was not taken lightly and that very careful choices were weighed up before coming to this decision.